Hahnemann University Hospital, a Drexel University College of Medicine affiliated hospital, has filed for bankruptcy and is closing. Despite large protests including the appearance of Bernie Sanders, candidate for U.S. President and Senator for Vermont, the hospital has started its long list of closures. Today (July 17), the hospital stopped admitting patients who are already in the emergency department. Technically, the hospital is scheduled to remain open until September 6, but the emergency room is scheduled for complete shutdown by August 16th. Those deadlines seem to creep closer to the present as Philadelphia Academic Health Systems, the hospital’s parent company, continues with its bankruptcy proceedings.

What Caused this Hospital to Struggle Financially?

What will happen to Hahnemann’s patients?

Hahnemann University Hospital sees 56,000 people in its ER annually. It is an important source of medical care in the Philadelphia community. Despite its monthly financial losses of millions of dollars a month, the hospital was not supposed to close so quickly. At the end of June, the city and the Pennsylvania Health Department ordered that the hospital not shut down until it had submitted formal notice of its closure, but Hahnemann started diverting patients that week. There is a minimum amount of time regulations allowed for a hospital to shut down any operations, which is 90 days, but Hahnemann has disregarded these regulations. The shutdown is set to continue in stages, and the other medical facilities in the area will have to take on Hahnemann’s patients. 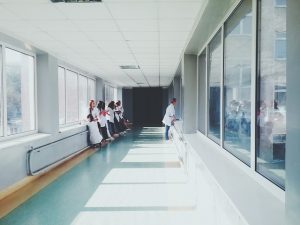 What will happen to Hahnemann employees?

What will happen to Hahnemann medical residents?

Well, if getting into a residency program through the Match wasn’t stressful enough, what is worse is losing that residency program. There are 571 residents, fellows and medical students that will be displaced by the Hahnemann closure. They can look for other residencies, but the programs have to sign off on the transfer of their funding, so they are stuck right now. Residencies are highly competitive, and being in limbo may force some residents to lose potential slots.

On a positive note, it looks like residents have been a top priority during this closure. The residency program may be sold to Tower Health for the price of $7.5 million, but it may not be large enough to take all of the residents. The ACGME has located 1,000 available positions, so this may not be a problem. Residents should not have too much trouble finding another program, but they are still being displaced, which adds to the stress inherent during residency.

A Tragedy on All Sides

It is rare to see a teaching hospital of this size close, and it is a great tragedy for the people of Philadelpha, PA as well as the nation. Losing a hospital means lessened access to healthcare services, and in this case, it will impact low-income populations disproportionately. This is one of the reasons there has been so much public outcry over corporate greed at the expense of the population. Hopefully it is not a sign of things to come, but news reports state many other hospitals in Philadelphia are struggling financially, so taking on an increased number of Medicaid and Medicare patients is not likely to help the situation.

For foreign medical graduates, this is one poor example of the dynamics of the United States Health Care System. Whether one agrees with the privatization of healthcare or prefers a universal system, it cannot be said that capitalism produced a good result for the public in this case.